We’ve been a bit absent on the blog front recently, big apologies from the Pickle Palace. We have been absent from the ‘palace’ for most of June catering for people on their holidays. Alex was away in the South of France and I was in Cornwall working near Polzeath. Most people would of thought that Alex got the lucky job and would have come back to the Cotswolds with a lovely tan…however it rained a fair bit in Carcassonne, yet in Cornwall it was as hot as Spain (so i’m told), unfortunately I am not as tanned as I may have hoped. Any tan certainly hasn’t lasted with the weather we’ve had here in the last week!

Cooking for people on their holiday is a real pleasure because they are so relaxed and enjoying family time without having the thought of Monday morning approaching. Its great to have more time to get to know people and their tastes in food. It’s also lovely to get to know a new place and explore some new local ‘foodie’ shops while enjoying time off in a beautiful setting. We have a lot of experience cooking for holidaymakers after several ski and summer seasons and it is nice to dip our toes back in to that life every now and then. 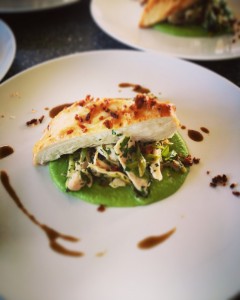 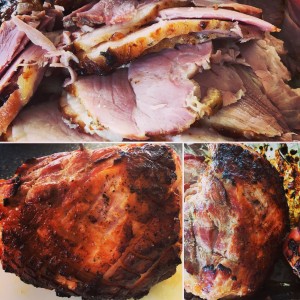 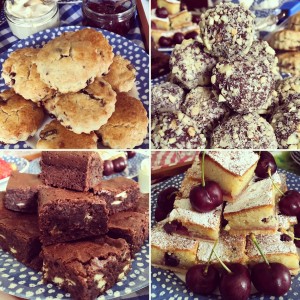 Cooking for a group for longer than a couple of nights also allows you to play around with the menu somewhat and to try out new things. Sometimes answering holiday requests that people wouldn’t normally eat at home; lobster, whole beef fillet, whole fresh fish on the BBQ etc. On this occasion in Cornwall there was a very special request…

A guest had bought their own home grown snails to be cooked up and enjoyed. This was a first time for them as well as me! The guest wanted to see if it was possible to make their own homegrown and cared for snails palatable for the whole family so I thought it best to do a bit of research and discover the tastiest way to serve this treat. Despite Alex being half French he didn’t have much advice for me so Google it was. 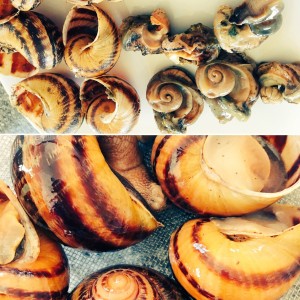 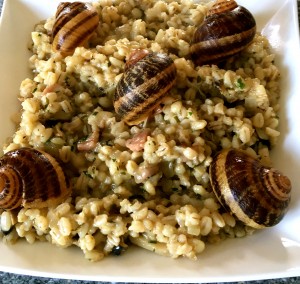 After a lot of searching I found a Canadian blog that recommended blanching the snails in a flavoursome stock then removing from their shells and serving on toast. I decided toast was perhaps a step too far for the children in the family to get on board with so made a barley-otto and added the bleached chopped up snails along with some smoked bacon and a handful of fresh herbs. As it turned out, it went down very well! All of us were quite surprised but the children in particular seemed to get on board with the new style risotto. Safe to say that the owner of said snails was happy with what had been produced, so watch this space, maybe they will be the next big thing on Cornish menus as well as French ones.